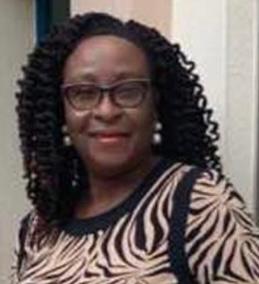 Has a myriad of working experiences spanning both the public and private sectors of the economy and cutting across inter-disciplinary and multi-cultural work settings. A product of Federal Government College, Warri, she proceeded to the University of Benin, obtaining a Bachelor’s Degree in Chemistry Education in 1986. She also obtained a Master’s Degree in Public Administration (MPA) from the University of Lagos in the year 2000.

After a stint in the private sector, Ms. Michael-Ojo joined Raw Materials Research and Development (RMRDC), a parastatal of the Federal Ministry of Science and Technology in 1991 as a Public Relations Officer. Though relatively inexperienced then, her natural interpersonal and communication skills soon started yielding dividends – as her liaison with various state governments and other stakeholders soon led to the establishment of RMRDC liaison offices in different states in Nigeria.

She was later to carry these skills to the private sector (and into her professional constituency – Chemistry) when she took up an appointment as Marketing and Public Relations Executive of Titon Chemicals Limited, and in the process increased the company’s customer base and pushed its frontiers to new heights.

Ms. Rita Michael-Ojo later moved her career into the bigger corporate world when she joined the Anglo-Dutch oil giants, Shell Exploration and Production Company (SNEPCO), where her skills in corporate services were deployed in such critical areas as negotiations, influencing, facilitations, business development, and strategy etc. In all of these, she demonstrated her inherent ability to manage and work with multi-disciplinary and multi-cultural teams.

In 2011, she decided to allude to the age-long maxim that “charity begins at home.” She returned to her primary professional constituency – Chemistry. She joined the services of the Institute of Chartered Chemists of Nigeria (ICCON), a Federal Government agency whose primary mandate is the regulation of the teaching, learning, and standard best practice of Chemistry in Nigeria. Her sojourn in ICCON has seen her hold such positions of responsibility as Head, Public / Government Affairs and Protocol; Head, Human Resources etc. Growing through the ranks, she has attained the rank of an Assistant Director and currently combines the positions of Head, Membership & Training as well as Head, Corporate Services. In these rather sensitive positions, she plays a crucial role in forming synergies and articulating modalities that are crucial to the realization of the Institute’s mandates geared towards sanitizing Nigeria’s chemical and allied sectors. In addition, she is entrusted with the arduous task of serving as interface between the Institute and the larger society, by way of supervising the production of relevant publications, organization of meetings and outreaches etc.

Beyond the façade of a firm and principled administrator, Rita’s humane disposition has spurred her into social services that impact positively on humanity.  In her younger days in the mid-1990s, she served as Program Director (Women’s Programmes) for HEALTH AFRICA, a non-governmental organization (NGO). She also served as Public Relations Officer to “Clean-up-the-world,” a community-based NGO whose environmental campaign inspired and empowered communities from different parts of the globe to clean up, fix and conserve their local environment. She also worked for African Refugee Foundation. More recently, her social work has been deployed to a project called “Women Mentoring Women,” an initiative whose partnership programmes essentially seek to inspire and encourage young women towards becoming the best version of themselves.

Ms. Michael-Ojo is currently a Fellow of the Institute of Chartered Chemists of Nigeria (ICCON) as well as a member of the Chemical Society of Nigeria (CSN). On a more leisurely note, she is a playing member of Ikeja Golf Club, Lagos. One of her landmarks in this regard includes her membership in the Local Organizing Committee (LOC) of the All African Golf Challenge in 2010. She also enjoys playing tennis, traveling, and movies.